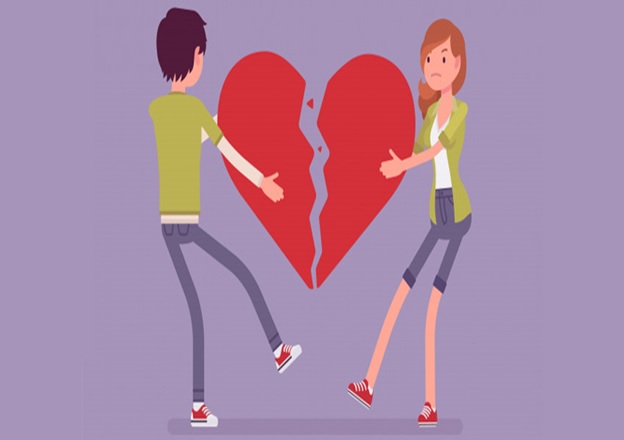 One of the many questions here is that you have been married for four years, but now it doesn't matter. In marriage, a wife is a husband from both sides. If there is a problem in your wife, you are not responsible for it, but the trouble is still looking for you, so you have to suffer as much as the joy of marrying her.
If you are a freedom fighter, you will have to suffer the same consequences until he recovers. You can use people to serve people but it is very difficult to make a home with him. You have to face so much hardship.

Three is not a thief artist permanent thing I'm a contact a deal in this case if the butterfly can fit between the two. If the other party feels love for each other and the other party finds the relationship difficult, then divorce becomes a very normal thing.
In the matter of social development, the Prophet (peace and blessings of Allaah be upon him) was simultaneously divorced from the Sahaabah, so the matter should be taken lightly.

You said why do you suffer so much without doing any wrong? In fact, there is no need to suffer for the sake of suffering. What is wrong with an ordinary innocent man when the terrorists find him?
There is no need to think that it is done in response to normal events. It is not a punishment for injustice.

In addition to taking the current child to the extreme of family unrest, I can not leave my family with the color of the clay, how can I give the child to their father in life, the child is 6 years old, he is crying for his father.
It is unfortunate that when parents have quarrels, when there is unrest in the family, the life of the children is very difficult. The mother needs them as much as they need them. Like Meditate regularly again. There is unrest in the comments. There is no need to give as many reasons as you can.
And never clap with one hand. Try to identify your mistakes. At least you can reduce your mistakes so that your unrest will be reduced.

I'm fine in the month of my marriage, but sometimes we talk about small things, the final stage of the table, the stage is gone, I will not force the family to talk. Divorce must be erased from the memory of civilization.
In fact, the less a bad phone call, the better it can be to pronounce it after it has become bad. It may be different when divorce is actually needed, but it is not a matter of verbal expression. You will be there for the time being.
My husband, the poet, has been insulting me among many people without even thinking about my dignity. He has been divorcing me over the phone for 15 years now.

The result of establishing the mind in mind for writing happy birthday essays is that we generally know that Adam was not being responsible for the power.
Even though the Qur'an does not speak of it, there is always an attempt to oppress women with unnecessary insults and there is no end to the amount of insults inflicted on women. There is a rhyme in rural Bengal about the death of the unfortunate cow and the death of God.

In other words, it is a loss to go to Gurumara, but it is a profit to go to the wife of a strong bride.

There will be a new wife and as much as can be found at the time of marriage, the Chinese proverb is to sit on his head once a day.
Even some poets of modern society are writing literature disrespecting literary women but the consequence of keeping the wife in the country is that the family never has peace and when there is a tendency of rebellion among women then this problem has now become apparent with the intention of breaking up the family.

With Japar, the problem is now so acute that seven out of every 10 divorced Americans are brutally killed by the husbands of 4.8 million women each year.

Visionary refrains from participating in abused women despite being involved in a perpetual conflict there.

This may be due to the fact that the two do not have their own peaks. 2 Then there is a kind of attraction towards the husband. That is why divorce seems to be repeated again and again. Divorce is not granted. If not here's a new product just for you!